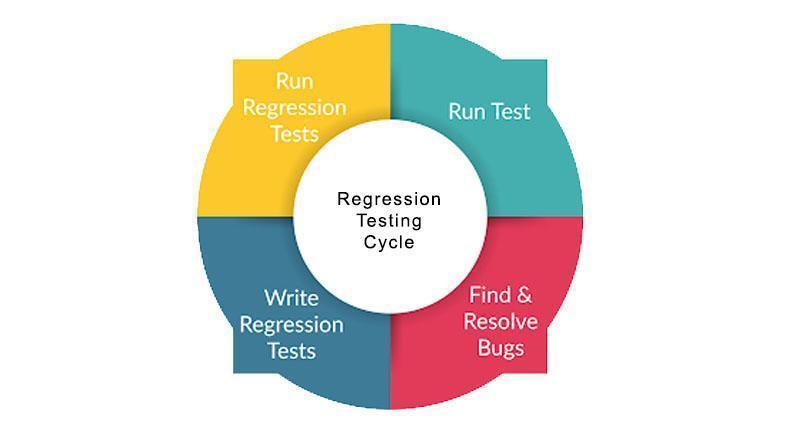 When it comes to a software solution, periodic updates to the functionality and features of the program are essential. When a product’s life cycle progresses, maintaining a balance between iterative testing and sprint work (agile software development) and effectively managing conflicts can be difficult. This is where regression testing comes in, so that it can be set.

Regression Testing – Introduction
Regression testing is defined as the type of software testing that focuses on detecting software regression (defects from a patch that may have affected other areas that have functioned perfectly so far). It helps detect and locate faults or bugs when an existing system is modified.
This ensures the program stays safe when any changes to the code are made. It focuses on reducing the possibility of faults or dependencies due to any code changes.

Corrective Regression Testing- This type of regression testing is performed on current test cases that do not require change of code. When finding bugs it takes less time. It is known for its simplicity and repeated use.

Progressive Regression Testing- Progressive regression testing can run properly after a few changes have been made to the product. It is also recommended when new test scenarios are created. It allows the testers to perform the necessary phase within the program’s modified version without affecting the current features.

Retest All Regression Testing- This is a thorough test, performed to find any bugs even though code changes have occurred in just certain parts of the software. It is a time-consuming process, for that reason.
Testing of every element of the product is scheduled in a set time. From the very beginning the process includes the reuse of all test scenarios. It focuses on tracking any change or improvement that may have been made during the previous testing phase. Due to time consumed, this testing is usually not recommended for all products.

Selective Regression Testing- As the name suggests, only selected test cases are handled from a module, where the code changes. There is no need to run the test in full. Selective regression study is more frequently done because of the advantages associated with it.

Complete Regression Testing- Full regression testing requires reviewing the current code and functionality before any experiments are performed. It is typically used in situations where the owner of the project does not want to make major adjustments or more during the test.
This form of regression testing is often carried out while a lot of changes are being made to the current application. It’s beneficial to allow you to restore any improvements that may be made during the process.

Partial Regression Testing- This method of testing includes the selection of certain similar modules which may have been affected by any code changes. It only plays its part in a tiny part of the cycle
In a wide variety of scenarios this form of regression testing is usually recommended.

Unit Regression Testing- Many tech professionals see it as the most significant form of regression testing. Every time code changes within a unit are complete, the tester runs all previous successful test scenarios once again. Since it focuses on the code in one unit, it normally performs it in isolation.
Once this test is performed, the tester will block most of the connections (isolation) and dependencies. That is why it is usually performed in non peak hours of low traffic hours. The test results are analyzed to classify the experiments carried out on the device. Therefore this form of regression testing is performed by professional testers. It makes organizing the cycle simpler for you, as it allows you to determine the proper procedure.

Application of Regression Testing- There are some cases or scenarios in which regression testing are performed, these are include the following:

Regression Testing Tools- Regression testing may consume time, QA team still executes in manual form, automation tools can help save more than half the time of running tests. They also help in increased cost savings. Some of these popular tools are as follows:

Regression testing plays an important role in developing a quality application. If changes are made to a code then it ensures that those changes are not going to make an impact on the current code, its features, or functionality.

Aayush is an innovative software QA tester, has the ability to understanding SDLC and STLC. He is well- oriented with agile methodologies, understand the defect tracking and test management. He is well acquainted with Build Validation and Verification, Smoke, Functional and Regression testing.